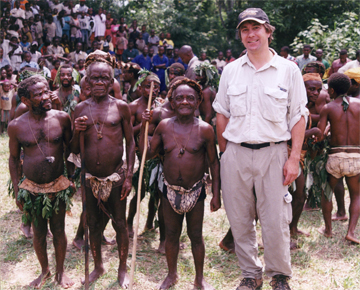 While the stature of pygmies is well-suited to tropical rainforests, the mechanisms underlying their growth remain poorly understood. In order to decipher these mechanisms, a team of scientists from the CNRS (Laboratoire Dynamique de l'Evolution Humaine), IRD (Laboratoire Patrimoines Locaux et Gouvernance) and UPMC1 (Centre de Recherche Saint-Antoine) studied a group of Baka pygmies in Cameroon. Their findings revealed that the Baka pygmy growth rate differed completely from that of another pygmy cluster, despite a similar adult height, which implies that small stature appeared independently in the two clusters. This work was published online on July 28, 2015 in an open-accerss article in Nature Communications. The article is titled “Growth Pattern from Birth to Adulthood in African Pygmies of Known Age.” The stature of pygmies has intrigued Westerners since their first encounter with them in 1865. This population is, in fact, made up of several ethnic groups, which belong to two main clusters. One is spread across Equatorial West Africa (Congo, Cameroon, Gabon, Central African Republic, and Western DRC) while the other is found in East Africa, in Eastern DRC and Rwanda. They all live in forested regions, linked with Bantu farmers. Although genetic factors are responsible for the small stature of pygmies, until now, scientists were unable to produce reliable data on their age in order to analyze their growth patterns. Thanks to the registers of the Catholic mission in Moange-le-Bosquet, Cameroon, it was possible, in the current research, to study 500 members of the Baka ethnic group for eight years in order to establish the first growth curves for pygmies. The scientists were thus able to show that although the body size at birth of the Baka was within normal limits, their growth rate then slowed significantly until the age of three years.
Login Or Register To Read Full Story
Login Register