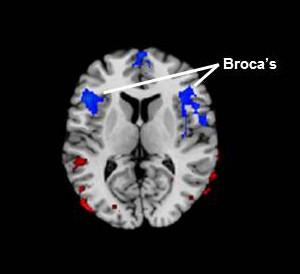 A study led by researchers at Children's Hospital Los Angeles (CHLA) demonstrates what lead investigator Bradley Peterson, M.D., calls "a critical mass of evidence" of a common underlying lifelong vulnerability in both children and adults who stutter. The scientists discovered that regional cerebral blood flow is reduced in the Broca's area - the region in the frontal lobe of the brain linked to speech production - in persons who stutter. More severe stuttering is associated with even greater reductions in blood flow to this region. In addition, a greater abnormality of cerebral blood flow in the posterior language loop, associated with processing words that we hear, correlates with more severe stuttering. This finding suggests that a common pathophysiology throughout the neural "language" loop that connects the frontal and posterior temporal lobe likely contributes to stuttering severity. Dr. Peterson, who is Director of the Institute for the Developing Mind at CHLA and a professor of the Keck School of Medicine at the University of Southern California, says that such a study of resting blood flow, or perfusion, has never before been conducted in persons who stutter. His team also recently published a study using proton magnetic resonance spectroscopy to look at brain regions in both adults and children who stutter. Those findings demonstrated links between stuttering and changes in the brain circuits that control speech production, as well as those supporting attention and emotion. The present blood flow study adds significantly to the findings from that prior study and furthermore suggests that disturbances in the speech processing areas of the brain are likely of central importance as a cause of stuttering. According to Dr.
Login Or Register To Read Full Story
Login Register