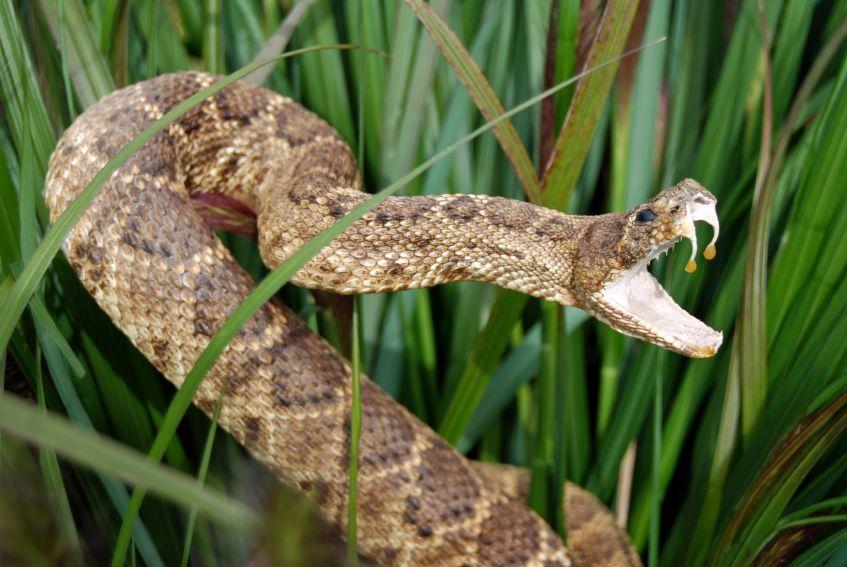 If you're one of the unfortunate few to be bitten by a venomous snake, having access to effective anti-venom to combat the swelling, pain, and tissue damage to these bites is critical. But new research by a team of biologists at Florida State University (FSU) has revealed that creating anti-venom is a bit tricky. That's because the type of venom a snake produces can change according to where it lives. Mark Marges, an FSU doctoral student in Professor Darin Rokyta's laboratory, led a research study that examined the venom of 65 eastern diamondback rattlesnakes (image) and 49 eastern coral snakes from all over the state of Florida to determine whether snake venoms varied by geography. In the rattlesnakes, geography mattered. The venom from an eastern diamondback rattlesnake in the Florida panhandle is very different from the venom from an eastern diamondback rattlesnake 500 miles south in the Everglades, and this has huge implications for snakebite treatment. "So if you use just southern venoms when making the antivenom, it would be ineffective against some of the more common toxins found in northern diamondback rattlesnakes," said Mr. Margres. This research was published online on November 11, 2014 in the journal Genetics. In the eastern diamondback rattlesnakes, the scientists found significant venom variation linked to geography. But, in the eastern coral snakes, they found the venom to be identical no matter where the snakes were found. "This can tell us a bit of the history and evolutionary patterns of the snakes," said Dr. Kenny Wray, a post-doctoral research associate in Dr. Rokyta's lab. "This suggests that the coral snakes may be recent invaders to the region and haven't had time to evolve different venoms in different areas."
Login Or Register To Read Full Story
Login Register