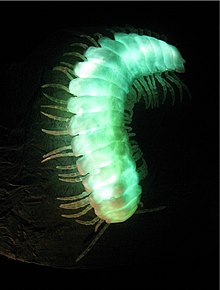 In the mountains of Virginia, millipedes have bright yellow and black colors to warn enemies that they are toxic and not worth eating. Their cousins in California convey this warning in a very different way — by glowing in the dark. But bioluminescence, at least in one millipede, may have evolved as a way to survive in a hot, dry environment, not as a means to ward off predators, according to scientists publishing online on May 4, 2015 in PNAS. The article is titled “Discovery of a Glowing Millipede in California and the Gradual Evolution of Bioluminescence in Diplopoda .” The discovery, based on study of a millipede that hadn’t been seen in 50 years, shows that even the seemingly most complex and intricate of traits are actually small evolutionary steps leading to an intricate feature we see today. “Living things glow in many different colors and for many different reasons, but now we know that the early evolutionary role of bioluminescence may be completely different than its modern day function,” said Dr. Paul Marek, an Assistant Professor of Entomology in the College of Agriculture and Life Sciences at Virginia Polytechnic Institute and State University. “This discovery clarifies the evolutionary origins of many complex traits, not just bioluminescence.” Dr. Marek began studying bioluminescence in millipedes seven years ago and the feature always seemed difficult to understand and trace in terms of its early origins. “Because we’re looking at a trait that has been shaped by millions of years of evolution, these traits often bear little resemblance to their ancestral form,” Dr. Marek said. But Dr. Marek rediscovered a significant piece of the luminosity puzzle while revisiting a Californian millipede that had been literally shelved for half a century.
Login Or Register To Read Full Story
Login Register