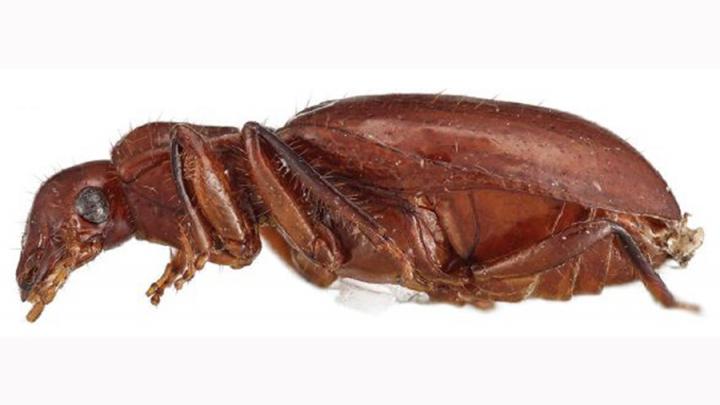 For 157 years, scientists have wished they could understand the evolutionary relationships of a curious South American ground beetle that was missing a distinctive feature of the huge family of ground beetles (Carabidae). Could it be that this rare species was indeed lacking a characteristic trait known in over 40,000 species worldwide and how could that be? Was that species assigned to the wrong family from the very beginning? The species, Nototylus fryi, or Fry's strange-combed beetle, is known so far only from a single, damaged specimen, found in 1863 in the Brazilian State of Espíritu Santo, that today is kept in the Natural History Museum of London. So rare and unusual, due to its lack of "antennal cleaners" - specialized "combing" structures located on the forelegs and used by carabids to keep their antennae clean, it also prompted the description of its own genus: Nototylus, now colloquially called “strange-combed beetles.” No mention of the structure was made in the original description of the species, so, at one point, scientists even started to wonder whether the beetle they were looking at was in fact a carabid at all. Because the area where Fry's strange-combed beetle had been found was once Southern Atlantic Forest, but today is mostly sugar cane fields, cacao plantations, and cattle ranches, scientists have feared that additional specimens of strange-combed beetles might never be collected again and that the group was already extinct. Recently, however, a US team of entomologists has reported the discovery of a second specimen, one also representing a second species of strange-combed beetles new to science.
Login Or Register To Read Full Story
Login Register