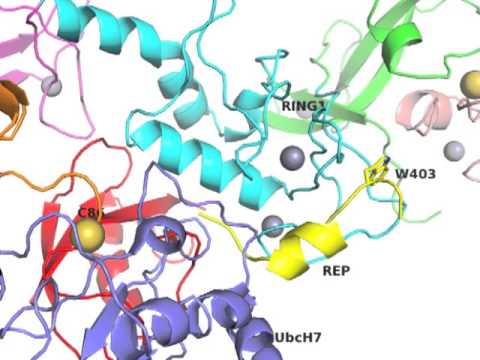 Rapamycin, an FDA-approved drug that extends lifespan in several species, prevented Parkinson's disease (PD) in middle-age mice that were genetically fated to develop the incurable neurodegenerative motor disease that affects as many as one million Americans. While the rapamycin did great things for the mice, scientists in the Andersen lab at the Buck Institute for Research on Aging in Novato, California, also got an unexpected dividend from the research - a new understanding of the role the parkin protein (image) plays in cellular dynamics, one that challenges the current dogma in PD research and presents new opportunities for drug discovery. The Buck Institute study was published in the September 16, 2015 issue of The Journal of Neuroscience. The article is titled “Mitochondrial Quality Control via the PGC1alpha-TFEB Signaling Pathway Is Compromised by Parkin Q311X Mutation, But Independently Restored by Rapamycin.” "Given its side effects as an immunosuppressant, there are issues with long-term use of rapamycin, but the results of our study suggest that use of derivatives of rapamycin, or other agents with similar biological properties, may constitute novel therapeutics for the disorder," said senior scientist and Buck faculty member Julie Andersen, Ph.D. "Our discoveries regarding parkin may provide an even more important therapeutic target for PD." Parkin is a protein encoded by the PARK2 gene in humans. Mutations in PARK2 are most commonly linked to both sporadic and familial forms of PD; they diminish the cell's ability to recycle its internal garbage. PD is characterized by the accumulation of damaged proteins and mitochondria in the area of the brain where the neurotransmitter dopamine is produced. Rapamycin prevented PD symptoms from occurring in middle-aged mice who had a human mutation in the PARK2 gene.
Login Or Register To Read Full Story
Login Register