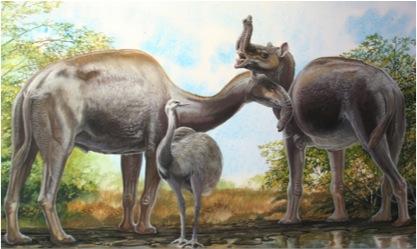 Scientists have resolved pieces of a nearly 200-year-old evolutionary puzzle surrounding the group of mammals that Charles Darwin called the "strangest animals ever discovered." New research, led by the American Museum of Natural History, the Natural History Museum in London, and the University of York, shows that South America's so-called "native ungulates"--the last of which disappeared only 10,000 years ago--are actually related to mammals like horses rather than to elephants and other species with ancient evolutionary ties to Africa as some taxonomists have long maintained. Published online on March 18, 2015 in Nature, the findings are based on fossil protein sequences, which allow researchers to peek back in time up to 10 times farther than they can with DNA. "Fitting South American ungulates to the mammalian family tree has always been a major challenge for paleontologists, because anatomically they were these weird mosaics, exhibiting features found in a huge variety of quite unrelated species living all over the place," said Dr. Ross MacPhee, one of the paper's authors and a curator in the American Museum of Natural History's Department of Mammalogy. "This is what puzzled Darwin and his collaborator Richard Owen so much in the early 19th century. With all of these conflicting signals, they couldn't say whether these ungulates were related to giant rodents, or elephants, or camels--or what have you." Dr. Ian Barnes, research leader at the Natural History Museum in London and another of the paper's authors, explained, "Although the bones of these animals had been studied for over 180 years, no clear picture of their origins had been reached.
Login Or Register To Read Full Story
Login Register