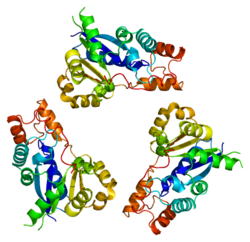 Scientists at Washington University School of Medicine in St. Louis have shown that a particular protein may help prevent the kind of brain damage that occurs in babies with cerebral palsy. Using a mouse model that mimics the devastating condition in newborns, the researchers found that high levels of the protective protein, Nmnat1 (NAD-synthesizing enzyme nicotinamide mononucleotide adenylyl transferase 1), substantially reduce damage that develops when the brain is deprived of oxygen and blood flow. The finding offers a potential new strategy for treating cerebral palsy as well as strokes, and perhaps Alzheimer's, Parkinson's, and other neurodegenerative diseases. The research was reported online on November 4, 2011 in the Proceedings of the National Academy of Sciences. "Under normal circumstances, the brain can handle a temporary disruption of either oxygen or blood flow during birth, but when they occur together and for long enough, long-term disability and death can result," says senior author Dr. David M. Holtzman, the Andrew and Gretchen Jones Professor and head of the Department of Neurology. "If we can use drugs to trigger the same protective pathway as Nmnat1, it may be possible to prevent brain damage that occurs from these conditions as well as from neurodegenerative diseases." The researchers aren't exactly sure how Nmnat1 protects brain cells, but they suspect that it blocks the effects of the powerful neurotransmitter glutamate. Brain cells that are damaged or oxygen-starved release glutamate, which can overstimulate and kill neighboring nerve cells. The protective effects of Nmnat1 were first identified five years ago by Dr. Jeff Milbrandt, the James S.
Login Or Register To Read Full Story
Login Register