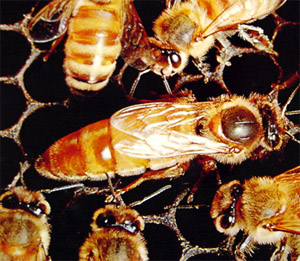 A honey bee becomes a royal queen or a common worker as a result of the food she receives as a larva. While it has been well established that royal jelly is the diet that makes bees queens, the molecular path from food to queen is still in dispute. However, scientists at Arizona State University, led by Adam Dolezal and Dr. Gro Amdam, together with colleagues at other institutions, have helped reconcile some of the conflicts about bee development and the role of insulin pathways and partner proteins. Their article "IRS and TOR nutrient-signaling pathways act via juvenile hormone to influence honey bee cast fate" has been published in the December 2011 issue of the Journal of Experimental Biology. Central to the dispute within the scientific community about "who would be queen" has been a ground-breaking study published in the journal Nature in 2011 by Japanese scientist Dr. Masaki Kamakura of the Biotechnology Research Center, Toyama Prefectural University. He found that a single protein in royal jelly, called royalactin, activated queen development in larval bees through interaction with an epidermal growth factor receptor (EGFR). Dr. Kamakura's work suggested that insulin signals do not play a role in queen development, despite previous studies suggesting otherwise, including work pioneered with the insulin receptor protein by Dr. Amdam's group. Undeterred by Dr. Kamakura's findings, Dolezal, a doctoral student, and Dr. Amdam, a Pew Biomedical Scholar and professor in ASU's School of Life Sciences, looked for ways to resolve the disparity between the research studies. Amdam's team's first step involved taking control of the insulin receptor's partner protein, IRS, which the insulin receptor relies upon for signaling.
Login Or Register To Read Full Story
Login Register