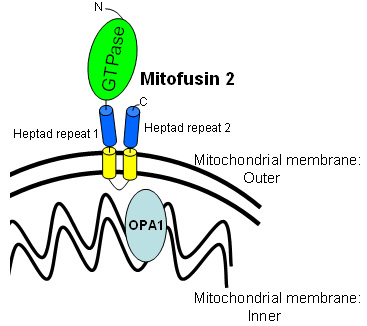 Each cell in an organism has a sensor that measures the health of its "internal" environment. This "alarm" is found in the endoplasmic reticulum (ER), which is able to sense cellular stress and trigger either rescue responses or the death of the cell. A team from the Institute for Research in Biomedicine (IRB), in Barcelona, has discovered that the protein Mitofusin 2 (Mfn2) plays a crucial role in correctly measuring stress levels, and also makes sure the pathways of cell repair or cell death are effective. The researchers reveal some of the molecular mechanisms that connect Mfn2 to ER stress in the August 28, 2013 issue of the The EMBO Journal. When the scientists removed Mfn2 from the cell under conditions of cell stress, the ER responded by over-activating the repair pathways. By doing so, it contradictorily functioned worse, reducing the capacity of cells to overcome the stress insult and promoting to a lesser degree apoptotic cell death. “When Mfn2 is removed, the cellular stress response pathways are completely disrupted,” says Dr. Antonio Zorzano, coordinator of IRB’s Molecular Medicine Programme and leader of the group “Heterogenic and polygenic diseases" Mfn2 is a mitochondrial protein whose deficiency is related to diabetes. In an earlier publication in PNAS, Dr. Zorzano’s research team demonstrated that without Mfn2, tissues become resistant to insulin, a characteristic of diabetes and the so-called metabolic syndrome. In this study, they also observed that the cells had higher endoplasmic reticulum stress. The current study investigates the relationship between mitochondria and ER, and indicates that changes in mitochondria, caused by the loss of the Mfn2 protein, directly affect the ER function.
Login Or Register To Read Full Story
Login Register