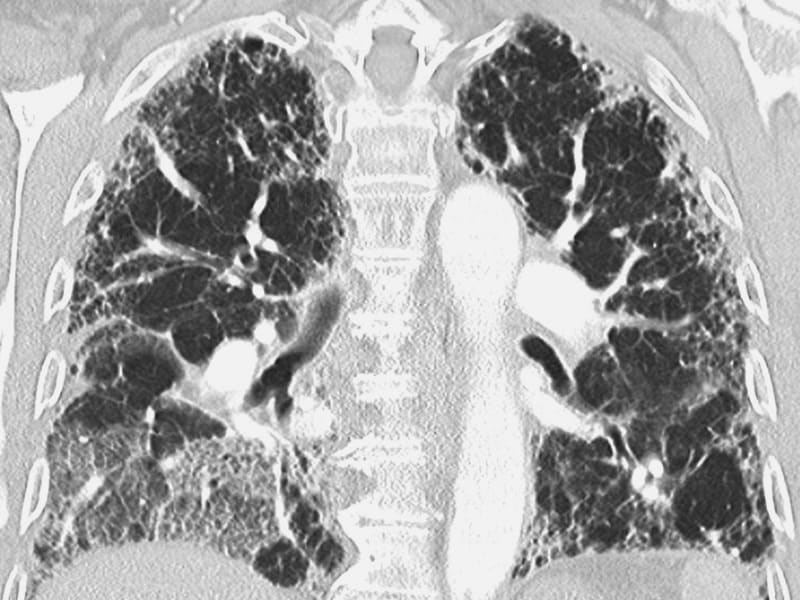 By coating tiny gel beads with lung-derived stem cells and then allowing them to self-assemble into the shapes of the air sacs found in human lungs, researchers at the Eli and Edythe Broad Center of Regenerative Medicine and Stem Cell Research at UCLA have succeeded in creating three-dimensional lung “organoids.” The laboratory-grown lung-like tissue can be used to study diseases including idiopathic pulmonary fibrosis, which has traditionally been difficult to study using conventional methods. “While we haven’t built a fully functional lung, we’ve been able to take lung cells and place them in the correct geometrical spacing and pattern to mimic a human lung,” said Dr. Brigitte Gomperts, an Associate Professor of Pediatric Hematology/Oncology and the study’s senior author. Idiopathic pulmonary fibrosis is a chronic lung disease characterized by scarring of the lungs. The scarring makes the lungs thick and stiff, which, over time results in progressively worsening shortness of breath and lack of oxygen to the brain and vital organs. After diagnosis, most people with the disease live about three to five years. Though researchers do not know what causes idiopathic pulmonary fibrosis in all cases; for a small percentage of people it runs in their families. Additionally, cigarette smoking and exposure to certain types of dust can increase the risk of developing the disease. To study the effect of genetic mutations or drugs on lung cells, researchers have previously relied on two-dimensional cultures of the cells. But when they take cells from people with idiopathic pulmonary fibrosis and grow them on these flat cultures, the cells appear healthy. “Scientists have really not been able to model lung scarring in a dish,” said Dr. Gomperts, who is a member of the UCLA Broad Stem Cell Research Center.
Login Or Register To Read Full Story
Login Register