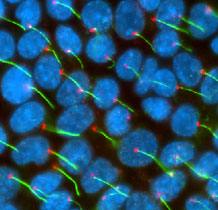 In a new review article, scientists suggest that there may be an important link between primary cilia and dysfunctional autophagy and the pathology of Hungtington’s disease (HD). The authors also hint at a possible role for exosomes that may be secreted by primary cilia. The review was published online July 10, 2015 in Cell Death & Differentiation. The article is titled “Primary Cilia and Autophagic Dysfunction in Hungtington’s Disease.” The scientists noted that “because protein misfolding and aggregation are central features of HD, it has long been suspected that cellular housekeeping processes such as autophagy might be important to disease pathology. Indeed, multiple lines of research have identified abnormal autophagy in HD, characterized generally by increased autophagic induction and inefficient clearance of substrates. To date, the origin of autophagic dysfunction in HD remains unclear and the search for actors involved continues. To that end, recent studies have suggested a bidirectional relationship between autophagy and primary cilia, which are oft-overlooked signaling organelles of most mammalian cells and novel regulators of autophagy. Interestingly, primary cilia structure is defective in HD, suggesting a potential link between autophagic dysfunction, primary cilia and HD pathogenesis. In addition, because polyQ-HTT also accumulates in primary cilia, the possibility exists that primary cilia might play additional roles in HD: perhaps by disrupting signaling pathways or acting as a reservoir for secretion and propagation of toxic, misfolded polyQ-HTT fragments.” According to the authors, primary cilia are single, non-motile organelles found on the surface of most mammalian cells.
Login Or Register To Read Full Story
Login Register