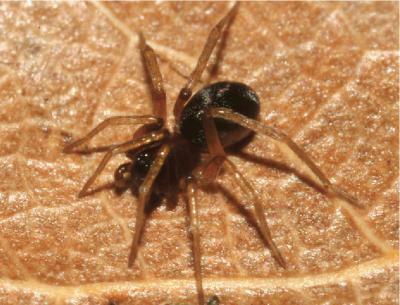 Two wasp species, Calymmochilus disparand Gelis apterus, have been recorded as parasitoids on ant-eating spiders in a study published online on February 1, 2013 in the open-access journal ZooKeys. The host spider,Zodarion styliferum, belongs to the largest genus of predominantly ant-eating spiders. Their distribution area includes Europe, Asia, and North Africa, significantly, with at least 35 species reported for the Iberian Peninsula only, marking a record in numbers in Portugal, where this study was conducted. Available data on the biology of the host spider shows that all species of the genus Zodarion are compulsory ant eaters. What is interesting is that these spiders perform aggressive mimicry, i.e., disguise as ants to help them in their hunt and to capture their prey. These crafty hunters are often nocturnal wanderers and mainly active in twilight. During the day, these spiders remain hidden in carefully built igloo-shaped stone retreats that are attached to the underside of rocks or dead wood. The igloos provide protection against unfavourable environmental conditions and enemies such as ants. Despite these evolutionary advancements in the fight for survival, however, the Z. styliferum spider turns out to be an easy victim for wasp species in their efforts striving for reproduction. The predatory wasp attacks during daylight when the spiders are inactive. The females of the parasitoid wasp species attack the hosts in the shelter of their igloo, penetrating the walls with their long ovipositors. When collected for this study, the wasp larvae were attached to the abdomen of an immobilized spider juvenile, which they used as food for their own development. Apart from feeding on the juveniles, the peculiar home of the ant-eating host provides another convenience for the parasites. The larva of G.
Login Or Register To Read Full Story
Login Register