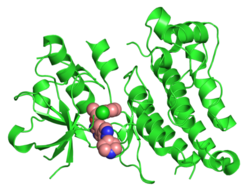 University of Pittsburgh and University of Pittsburgh Medical Center (UPMC) researchers are paving the way for genome-targeted treatments in pancreatic cancer, an especially deadly form of cancer with few existing therapeutic options, according to a pair of recent studies. The first study used genomic profiling to identify targeted therapies that resulted in benefits for patients with pancreatic cancer, including one whose tumor contained a mutation in the anaplastic lymphoma kinase (ALK) gene. In the second study, researchers used existing drugs already treating other types of ALK-mutated cancers to improve outcomes in pancreatic cancer patients with the same genetic alterations. "Together, these two findings begin to capture the promise of precision medicine in pancreatic cancer, which has so far not experienced the same success with targeted treatments as other cancer types," said the senior author of both studies, Nathan Bahary, MD, PhD, Associate Professor of Medicine at Pitt, and Co-Director of the UPMC Pancreatic Cancer Center of Excellence. "The assessment of these actionable alterations is now part of routine pancreatic cancer care at UPMC." As the third-leading cause of cancer deaths in the United States, and with a five-year survival rate of just 8 percent, pancreatic cancer is one of the most lethal forms of the disease. Currently available treatments are largely ineffective, so there is a desperate need for better therapeutic options, explained Dr. Bahary. In the first study, published in the January 2017 issue of Cancer Medicine, first author Mashaal Dhir, MD, an oncologic surgical fellow at UPMC, and colleagues used DNA sequencing to look for gene changes in over 100 patient samples of advanced gastrointestinal cancers, including colorectal and pancreatic tumors.
Login Or Register To Read Full Story
Login Register