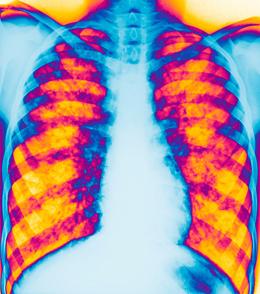 Treatment with two medications that target the most common genetic cause of cystic fibrosis improves lung function and lowers the rate of pulmonary exacerbations, according to the results from a Phase III international clinical trial published online in an open-access article in the New England Journal of Medicine on May 17, 2015. The article is titled “Lumacaftor–Ivacaftor in Patients with Cystic Fibrosis Homozygous for Phe508del CFTR.” Combined lumacaftor-ivacaftor therapy was shown to be safe and effective for cystic fibrosis patients with two copies of the cystic fibrosis gene mutation (F508del) found in nearly half of the patients with this disease. "These groundbreaking findings will benefit around 15,000 patients in U.S. alone," said Susanna McColley, M.D., one of the study's authors and Professor of Pediatrics at Northwestern University Feinberg School of Medicine. She is also the Director of the Clinical and Translational Research Program at the Stanley Manne Children's Research Institute, the research arm of Ann & Robert H. Lurie Children's Hospital of Chicago. Cystic fibrosis is a genetic disease that causes the body to make thick, sticky mucus. In the lungs, the mucus leads to chronic infections and increasing loss of lung function. In the pancreas, the thick mucus keeps enzymes from reaching the gut to digest food. The median life expectancy for patients is 37 years, and available treatments mostly focus on managing symptoms and consequences of the disease. "While significant progress has been made with supportive therapies for cystic fibrosis, developing treatments that address the underlying genetic cause has been a challenge," said Dr. McColley who is also the Associate Director of the Cystic Fibrosis Center at Lurie Children's.
Login Or Register To Read Full Story
Login Register