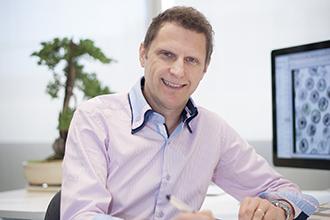 Australian scientists have found a potential cure for hepatitis B virus (HBV) infections, with a promising new treatment proving 100 per cent successful in eliminating the infection in preclinical models. Australian patients are now the first in the world to have access to the potential treatment - a combination of an antiviral drug and an anti-cancer drug - which is in phase 1/2a clinical trials in Melbourne, Perth, and Adelaide. Scientists from Melbourne's Walter and Eliza Hall Institute developed the combination treatment using birinapant, a drug developed by U.S. biotech company TetraLogic Pharmaceuticals (http://tetralogicpharma.com/) for treating cancer. Hepatitis B is a chronic viral disease that is currently incurable. Dr. Marc Pellegrini (photo), Dr. Greg Ebert, and colleagues at the Institute used their studies of the behavior of hepatitis B virus in infected cells as a basis for the treatment. The research was published online on April 20, 2015 in two papers in PNAS. Dr. Pellegrini said the treatment was successful in curing infections in preclinical models, leading to a human trial that began in December 2014. "We were 100 per cent successful in curing HBV infection in hundreds of tests in preclinical models," Dr. Pellegrini said. "Birinapant enabled the destruction of hepatitis B-infected liver cells while leaving normal cells unharmed. Excitingly, when birinapant was administered in combination with current antiviral drug entecavir, the infection was cleared twice as fast compared with birinapant alone.
Login Or Register To Read Full Story
Login Register