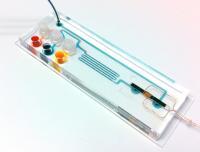 A handheld diagnostic device that Massachusetts General Hospital (MGH) investigators first developed to diagnose cancer has been adapted to rapidly diagnose infections by Mycobacterium tuberculosis (TB) and other important infectious bacteria. Two papers, one appearing in the journal Nature Communications, and the other in Nature Nanotechnology describe portable devices that combine microfluidic technology with nuclear magnetic resonance (NMR) to not only diagnose these important infections, but also determine the presence of antibiotic-resistant bacterial strains. "Rapidly identifying the pathogen responsible for an infection and testing for the presence of resistance are critical not only for diagnosis but also for deciding which antibiotics to give a patient," says Ralph Weissleder, M.D., Ph.D., director of the MGH Center for Systems Biology (CSB) and co-senior author of both papers. "These described methods allow us to do this in two to three hours, a vast improvement over standard culturing practice, which can take as much as two weeks to provide a diagnosis." Investigators at the MGH CSB previously developed portable devices capable of detecting cancer biomarkers in the blood or in very small tissue samples. Target cells or molecules are first labeled with magnetic nanoparticles, and the sample is then passed through a micro NMR system capable of detecting and quantifying levels of the target. But initial efforts to adapt the system to bacterial diagnosis had trouble finding antibodies – the detection method used in the earlier studies – that would accurately detect the specific bacteria. Instead the team switched to targeting specific nucleic acid sequences. The system described in the Nature Communications paper, published online on April 23, 2013, detects DNA from the tuberculosis bacteria in small sputum samples.
Login Or Register To Read Full Story
Login Register