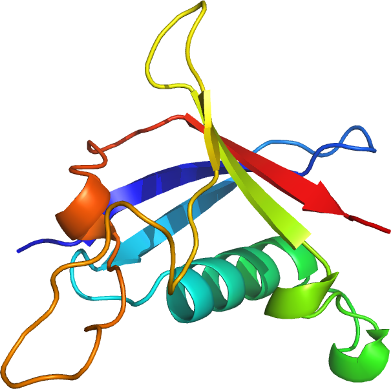 Scientists have known for some time that people who carry a lot of weight around their bellies are more likely to develop diabetes and heart disease than those who have bigger hips and thighs. But what hasn't been clear is why fat accumulates in different places to produce these classic "apple" and "pear" shapes. Now, researchers have discovered that a gene called Plexin D1 (image of the Plexin D1 protein) appears to control both where fat is stored and how fat cells are shaped, known factors in health and the risk of future disease. Acting on a pattern that emerged in an earlier study (February 2015) of waist-to-hip ratios in 224,000 people, the new study, which was published online on March 23, 2015 in PNAS, found that zebrafish that were missing the Plexin D1 gene had less abdominal or visceral fat, the kind that lends some humans a characteristic apple shape. The researchers also showed that these mutant zebrafish were protected from insulin resistance, a precursor of diabetes, even after eating a high-fat diet. The PNAS article is titled “Plexin D1 Determines Body Fat Distribution by Regulating the Type V Collagen Microenvironment in Visceral Adipose Tissue.” "This work identifies a new molecular pathway that determines how fat is stored in the body, and, as a result, affects overall metabolic health," said John F. Rawls, Ph.D., senior author of the study and Associate Professor of Molecular Genetics and Microbiology at Duke University School of Medicine. "Moving forward, the components of that pathway can become potential targets to address the dangers associated with visceral fat accumulation."
Login Or Register To Read Full Story
Login Register