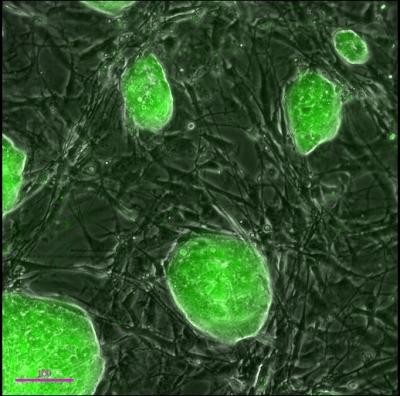 In 2008, the World Health Organization (WHO) announced a global effort to eradicate malaria, which kills about 800,000 people every year. As part of that goal, scientists are trying to develop new drugs that target the malaria parasite during the stage when it infects the human liver, which is crucial because some strains of malaria can lie dormant in the liver for several years before flaring up. A new advance by MIT engineers could aid in these efforts. The researchers have discovered a way to grow liver-like cells from induced pluripotent stem cells (iPSCs). These cells can be infected with several strains of the malaria parasite and respond to existing drugs the same way that mature liver cells taken from human donors do. Such cells offer a plentiful source for testing potential malaria drugs because they can be made from skin cells. New drugs are badly needed, because some forms of the malaria parasite have become resistant to existing treatments, says Dr. Sangeeta Bhatia, the John and Dorothy Wilson Professor of Health Sciences and Technology (HST) and Electrical Engineering and Computer Science at MIT. "Drug resistance is emerging that we are continually chasing. The thinking behind the call to eradication is that we can't be chasing resistance and distributing bed nets to protect from mosquitoes forever. Ideally, we would rid ourselves of the pathogen entirely," says Dr. Bhatia, who is also a member of MIT's Koch Institute for Integrative Cancer Research and Institute for Medical Engineering and Science (IMES). These cells, described online on February 5, 2015 in an open-access article in Stem Cell Reports, could also allow scientists to test drugs on cells from people with different genetic backgrounds, who may respond differently to malaria infection and treatment.
Login Or Register To Read Full Story
Login Register