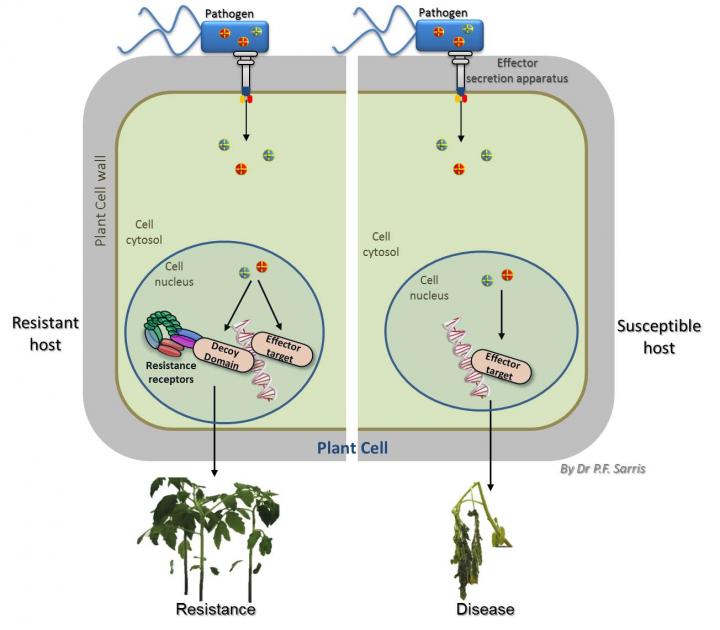 Receptors carrying built-in decoys are the latest discovery made in studying the evolutionary battle between plants and pathogens. The decoy domains within the receptor detect pathogens and raise the cell's alarm when there is an infection. Plants display component parts of their immune system on receptors to trick pathogens into binding with them, which then triggers defense mechanisms. The discovery comes from Professor Jonathan Jones' group at The Sainsbury Laboratory in the UK, and was published in the May 21, 2015 issue of Cell, together with a companion paper on a similar discovery from Dr. Laurent Deslandes’ group at the CNRS in Toulouse, France. The Jones article is titled “A Plant Immune Receptor Detects Pathogen Effectors that Target WRKY Transcription Factors.” The Deslands article is titled “A Receptor Pair with an Integrated Decoy Converts Pathogen Disabling of Transcription Factors to Immunity.” Pathogens target key parts of the plant's defense machinery in their attempts to suppress an immune response. Plants have evolved to display these targets on receptors that are primed to set off their alarm system. When the pathogen binds, the receptor starts the process of shutting down the cell to contain the pathogen and stop it from spreading. The research from Professor Jones' group shows one way in which plants perceive pathogens. Perception of pathogens is essential for immunity. Plants have very efficient defense mechanisms to stop a pathogen, if they can detect it soon enough. In turn, pathogens are constantly evolving to become stealthier so as to evade perception by the host. This arms race means both plant and pathogen are constantly under pressure to evolve new ways to outwit each other. Scientists now know these ways include the integration of decoy domains within receptors.
Login Or Register To Read Full Story
Login Register