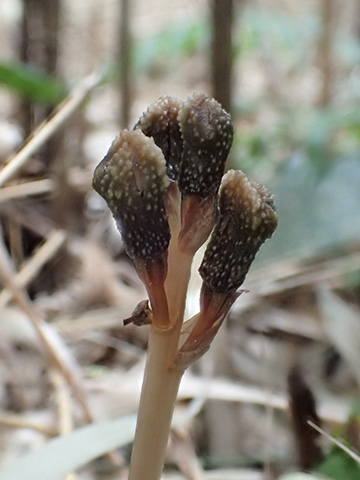 Project Associate Professor Kenji Suetsugu, Ph.D., (Kobe University Graduate School of Science) has discovered a new species of plant on the subtropical Japanese island of Kuroshima (located off the southern coast of Kyushu in Kagoshima prefecture) and named it Gastrodia kuroshimensis. This research was published in the October 12, 2014 of Phytotaxa. The open-access article is titled “Gastrodia kuroshimensis (Orchidaceae), a new mycoheterotrophic and complete cleistogamous plant from Japan.” Non-photosynthetic mycorrhizal plants, or mycoheterotrophic plants, have long attracted the curiosity of botanists and mycologists. However, a common feature of most mycoheterotrophic plants is their extreme scarcity and small size. In addition, most species are found in the dark understory of forests, only discoverable during the flowering and fruiting period when aboveground organs appear through the leaf litter. As such, we still have scant knowledge on the precise taxonomy of the mycoheterotrophic group. Professor Suetsugu is involved in documenting the distribution and classification of mycoheterotrophic plants in Japan. In April 2016, during his research trip in the lowland forests in Kuroshima, he came across approximately one hundred individuals of an unfamiliar mycoheterotrophic species. He collected a specimen, carried out a detailed examination of the plant’s morphological characteristics and found that it was indeed a new species. The description of a new flowering plant species in Japan is itself a very rare event as the flora of this region have been thoroughly investigated. However, G. kuroshimensis (image) was a particularly special discovery because it is both completely mycoheterophic, deriving its nutrition not from photosynthesis but from host fungi, and completely cleistogamous, producing flowers that never bloom.
Login Or Register To Read Full Story
Login Register