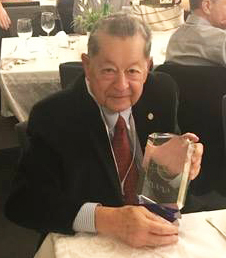 As one of the highlights of the 2018* biennial Ataxia-Telangiectasia (A-T)** Clinical Research Conference, held this year in Naples, Italy (November 29-December 1), a lifetime achievement award was presented to UCLA Professor-in-Residence of Genetics Richard A. Gatti (photo), MD, who for over 40 years has continuously advanced the world’s scientific understanding of this rare, but devastating neurodegenerative disease, largely of children (see additional pics from event at end). In addition to his own numerous scientific achievements in the area of A-T, Dr. Gatti has stimulated hundreds of graduate students to pursue further studies of A-T and he has inspired numerous scientific colleagues to work as hard as they can to better understand this disease and to bring us ever closer to possible treatments and even an eventual cure. And Dr. Gatti, not only carries out scientific research at the highest level, but he sees and treats A-T patients and their families, so he is never far from the ultimate driving motivation of trying to do his best to help real patients and families who are struggling with an extremely difficult disease. Approximately 120 A-T experts from around the world attended the three-day conference in Naples, which was held at the University of Naples Federico II, right on the shore of the Bay of Naples, and with the daunting vista of Mount Vesuvius standing spectacularly right across the Bay. After a very full day of scientific sessions on Saturday, almost all the conference attendees boarded the evening buses that would take them high into the hills of Naples for the wonderful award dinner for Dr. Gatti, which featured spectacular vistas of the beautiful lights and waters of historic Naples.
Login Or Register To Read Full Story
Login Register