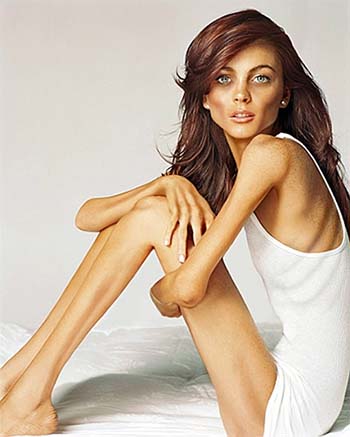 People with anorexia nervosa and with body dysmorphic disorder have similar abnormalities in their brains that affect their ability to process visual information, a new UCLA study reveals. People with anorexia have such an intense fear of gaining weight that they starve themselves even when they are dangerously thin. Body dysmorphic disorder is a psychiatric condition characterized by an obsessive preoccupation with a perceived flaw in physical appearance. The researchers found that people with both disorders had abnormal activity in the visual cortex of the brain during the very first instants when the brain processes "global" information, or images as a whole, as opposed to a tiny detail. According to the authors, it could also mean that perceptual retraining may be an effective therapy for both disorders. Perceptual retraining is a behavioral exercise that attempts to help adjust or correct the participant's balance of global and detailed processing. For both of these disorders, participants are encouraged to not focus on details and process objects more globally. Previous research on body dysmorphic disorder has shown the same type of abnormal activity in the visual cortex, but the UCLA study is the first to link the locations of the abnormal brain activity with time periods beginning as early as one-tenth of a second after an image is viewed. Understanding that timing is significant, the authors write, because it may help scientists determine whether the problem is in lower-level perception that takes place in the visual cortex, or elsewhere in higher-level brain systems. The study was published online on February 5, 2015 in the peer-reviewed journal Psychological Medicine.
Login Or Register To Read Full Story
Login Register