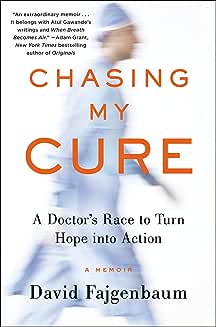 In the introduction to his memoir “Chasing My Cure: A Doctor’s Race to Turn Hope Into Action (https://chasingmycure.com/), Dr. David Fajgenbaum discussed how he learned that “hope cannot be a passive concept.” “It’s a choice and a force,” he wrote. “Hoping for something takes more than casting out a wish to the universe and waiting for it to occur. Hope should inspire action. And when it does inspire action in medicine and science, that hope can become a reality, beyond your wildest dreams.” Hope is something Dr. Fajgenbaum, 34, an Assistant Professor of Medicine at The Perelman School Of Medicine at the University of Pennsylvania, knows Intimately. He’s been in hospital rooms as a patient and a doctor — seeing both sides of what it’s like to diagnose and be diagnosed with a deadly disease. He knows what it’s like to experience radical ups and downs in his own health and see others go through the same thing. His life changed in 2010 while he was a third-year medical student at the same university where he now works. He began noticing strange, sudden shifts in his health — from night sweats to fatigue. Within several weeks, his organs were failing, and in November of that year, he was read his last rites. What was wrong? Dr. Fajgenbaum received a very rare diagnosis: Castleman disease (https://www.healthline.com/health/castleman-disease), an immune disorder that results in an overgrowth of cells in the lymph nodes. While not a form of cancer, the condition is often initially confused with a cancer diagnosis. The lymph nodes generally tied to the condition are those found in the neck, underarm, groin, and collarbone.
Login Or Register To Read Full Story
Login Register