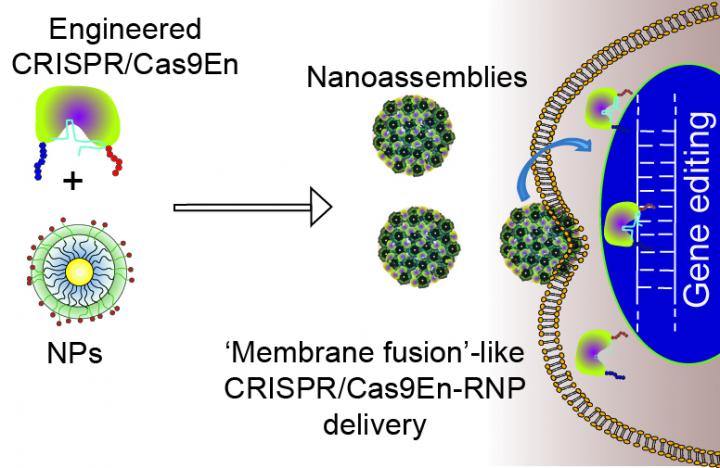 More and more scientists are using the powerful new gene-editing tool known as CRISPR/Cas9, a technology isolated from bacteria, that holds promise for new treatment of such genetic diseases as cystic fibrosis, muscular dystrophy, and hemophilia. But to work well, the new gene-clipping tool must be delivered safely across the cell membrane and into its nucleus, a difficult process that can trigger the cell's defenses and "trap" CRISPR/Cas9, greatly reducing its treatment potential. Now, researchers in nanochemistry expert Dr. Vincent Rotello's laboratory at the University of Massachusetts Amherst have designed a delivery system using nanoparticles to assist CRISPR/Cas9 across the membrane and into the cell nucleus while avoiding entrapment by cellular machinery. Details wrepublished online on January 27, 2017 in ACS Nano. The article is titled “Direct Cytosolic Delivery of CRISPR/Cas9-Ribonucleoprotein for Efficient Gene Editing.” The lab's experiment leader, Dr. Rubul Mout, says, "CRISPR has two components: a scissor-like protein called Cas9, and an RNA molecule called sgRNA that guides Cas9 to its target gene. Once the Cas9-sgRNA pair gets to the destination gene in the nucleus, it can interrogate its genetic mistakes and correct them with the help of the host cell's repair machinery." He points out that bcause CRISPR's potential was first discovered in 2012, gene editing or genome engineering has quickly become an intense research topic in biology and medicine. The goal is to treat otherwise incurable genetic diseases by manipulating diseased genes. "However, to achieve this, biotech and pharmaceutical companies are constantly searching for more efficient CRISPR delivery methods," he adds.
Login Or Register To Read Full Story
Login Register