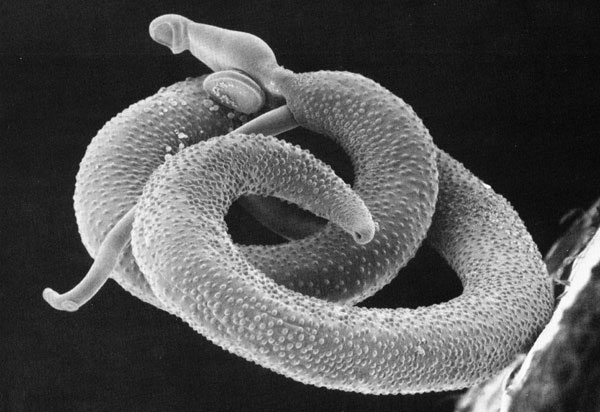 Schistosomiasis is a neglected tropical disease caused by parasitic worms endemic in parts of Africa, Southeast Asia, and Central and South America. It is currently treated by the drug praziquantel which, while both effective and cost-efficient, does not prevent reinfection after the disease has cleared. Praziquantel is the only current treatment, and while no resistance has been observed in humans, animal models predict that repeated rounds of treatment may lead to the evolution of drug resistance. It is therefore important to explore both alternative treatments and synergistic therapies to expand the lifetime and effectiveness of the praziquantel treatment. Researchers from the University of Sao Paulo in Brazil used a gene expression microarray to explore how the gene expression of adult worms was affected by a sub-lethal dose of praziquantel. Previous research had found differences between male and female worms, and the researchers found further differences between females from mixed-sex infection either joined to males in a mating pair, or unpaired. Females from mixed-sex infections unpaired with males were more likely to down-regulate their gene expression in response to praziquantel (77% of genes down-regulated). Conversely, paired females were more likely to up-regulate their genes in response to treatment, with 98% of affected genes up-regulated. The researchers also looked for genes that could act as potential targets for new therapies. They found a promising target in a gene affected in all the worms that coded for a type of proton pump. The proton pump was homologous to a protein found in humans and targeted by the proton pump inhibitor drug omeprazole.
Login Or Register To Read Full Story
Login Register