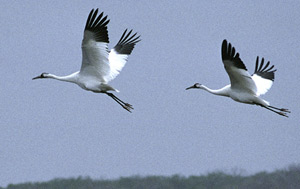 Whooping cranes are changing migration patterns in response to climate and land use change, and these new patterns are being determined by the older, more experienced, members of the population. Researchers from Senckenberg Biodiversity and Climate Research Centre, the Goethe University Frankfurt, the U.S. Geological Survey, the University of Maryland, and the International Crane Foundation investigated a behavior known as "shortstopping," which is the shortening of a migration route by shifting wintering grounds toward the breeding grounds. Shortstopping can benefit migrating birds by decreasing the amount of energy that they use on long-distance flights. They also can arrive at the breeding grounds earlier, which can be beneficial. This requires that the birds find suitable overwintering sites closer to breeding grounds, and due to climate and land use change, suitable sites can now be found at higher latitudes. "Our results show that when migratory groups winter closer to the breeding grounds, the first groups to use these new sites include older birds. For each additional year of age of the oldest bird in the group, the distance between breeding and wintering grounds was reduced by 40 km, or almost 25 miles," said Claire Teitelbaum, Ph.D., a Senckenberg & Goethe University Frankfurt researcher, and lead author of the study. "We also found that site familiarity may be an important factor in where migratory groups short-stop. Older birds often chose overwintering sites which they were familiar with from previous migrations." The population studied is a reintroduced population, established by the Whooping Crane Eastern Partnership. In 2001, the Partnership began releasing captive-reared birds and teaching them to migrate using ultralight aircraft.
Login Or Register To Read Full Story
Login Register