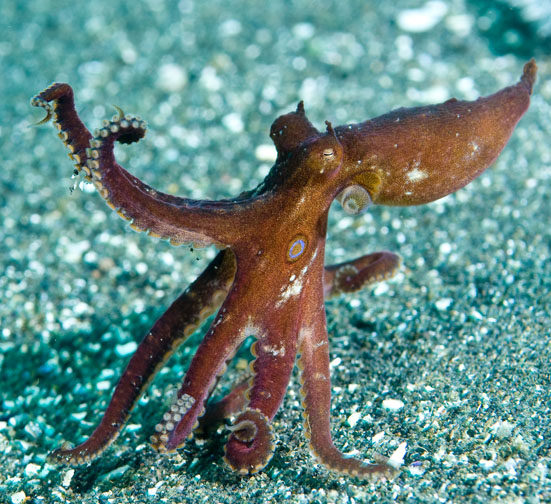 The first whole genome analysis of an octopus reveals unique genomic features that likely played a role in the evolution of traits such as large complex nervous systems and adaptive camouflage. An international team of scientists sequenced the genome of the California two-spot octopus, the first cephalopod ever to be fully sequenced, and mapped gene expression profiles in 12 different tissues. The findings were published as the cover story (open-access) of the August 12, 2015 issue of Nature. The article is titled “The Octopus Genome and the Evolution of Cephalopod Neural and Morphological Novelties.” Renowned Nobelist Dr. Sydney Brenner is an author on this landmark paper. The researchers discovered striking differences from other invertebrates, including widespread genomic rearrangements and a dramatic expansion of a family of genes involved in neuronal development that was once thought to be unique to vertebrates. Hundreds of octopus-specific genes were identified, with many highly expressed in structures such as the brain, skin, and suckers. The results serve as an important foundation for evolutionary studies and deeper investigations into the genetic and molecular mechanisms that underlie cephalopod-specific traits. The work was conducted by teams from the University of Chicago; University of California, Berkeley; and Okinawa Institute of Science and Technology, as part of the Cephalopod Sequencing Consortium. "The octopus appears to be utterly different from all other animals, even other molluscs, with its eight prehensile arms, its large brain, and its clever problem-solving capabilities," said co-senior author Clifton Ragsdale, Ph.D., Associate Professor in the Departments of Neurobiology and Organismal Biology and Anatomy at the University of Chicago.
Login Or Register To Read Full Story
Login Register