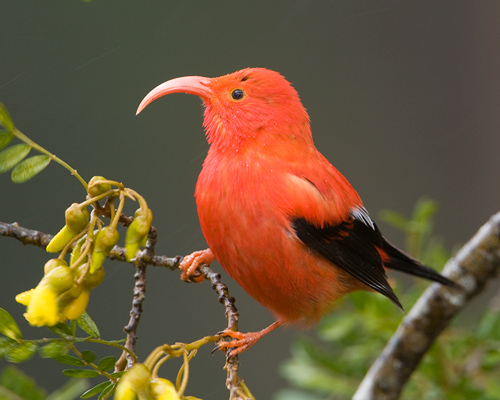 Using one of the largest DNA data sets for a group of birds and employing next-generation sequencing (NGS) methods, Smithsonian scientists and collaborators have determined the evolutionary family tree for one of the most strikingly diverse and endangered bird families in the world, the Hawaiian honeycreepers. Not only have the researchers determined the types of finches that the honeycreeper family originally evolved from, but they have also linked the timing of that rapid evolution to the formation of the four main Hawaiian Islands. The findings were published online on October 20, 2011 in Current Biology. "There were once more than 55 species of these colorful songbirds, and they are so diverse that historically it wasn't even entirely clear that they were all part of the same group," said Dr. Heather Lerner, who was a postdoctoral researcher at the Smithsonian Conservation Biology Institute's (SCBI’s) Center for Conservation and Evolutionary Genetics when she conducted this research, and is currently an assistant professor of biology at Earlham College and Joseph Moore Museum director. "Some eat seeds, some eat fruit, some eat snails, some eat nectar. Some have the bills of parrots, others of warblers, while some are finch-like and others have straight, thin bills. So the question that we started with was how did this incredible diversity evolve over time," Dr. Lerner said. The answer is unique to the Hawaiian Islands, which are part of a conveyor belt of island formation, with new islands popping up as the conveyor belt moves northwest. Each island that forms represents a blank slate for evolution, so as one honeycreeper species moves from one island to a new island, those birds encounter new habitat and ecological niches that may force them to adapt and branch off into distinct species.
Login Or Register To Read Full Story
Login Register