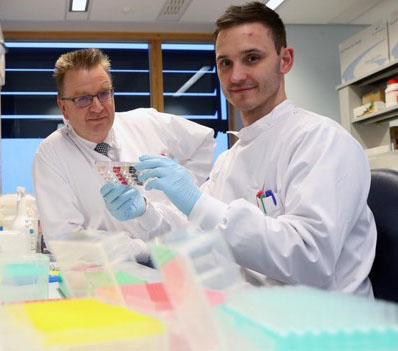 Researchers at Cardiff University in Wales have discovered a new type of killer T-cell that offers hope of a “one-size-fits-all” cancer therapy. T-cell therapies for cancer - where immune cells are removed, modified, and returned to the patient’s blood to seek and destroy cancer cells - are the latest paradigm in cancer treatments. The most widely-used therapy, known as CAR-T, is personalized to each patient, but targets only a few types of cancers and has not been successful for solid tumors, which make up the vast majority of cancers. Cardiff researchers have now discovered T-cells equipped with a new type of T-cell receptor (TCR) which recognizes and kills most human cancer types, while ignoring healthy cells. This newly discovered TCR recognizes a molecule present on the surface of a wide range of cancer cells, as well as in many of the body’s normal cells but, remarkably, is able to distinguish between healthy cells and cancerous ones, killing only the latter. The researchers said this meant it offered “exciting opportunities for pan-cancer, pan-population” immunotherapies not previously thought possible. Conventional T-cells scan the surface of other cells to find anomalies and eliminate cancerous cells - which express abnormal proteins - but ignore cells that contain only “normal” proteins. The scanning system recognizes small parts of cellular proteins that are bound to cell-surface molecules that belong to the human leukocyte antigen (HLA) system, allowing killer T-cells to see what’s occurring inside cells by scanning their surface. Proteins in the HLA system vary widely between individuals, which has previously prevented scientists from creating a single T-cell-based treatment that targets most cancers in all people.
Login Or Register To Read Full Story
Login Register