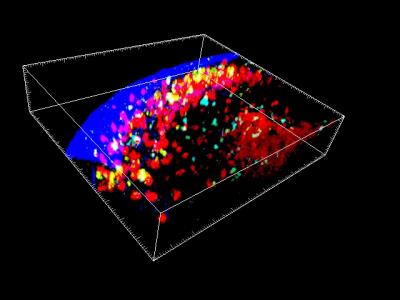 For the first time in decades, researchers have identified a new “micro-organ” within the immune system - and they say it's an important step towards understanding how to make better vaccines. In a study published online on August 22, 2018 in Nature Communications, scientists at Australia's Garvan Institute of Medical Research have identified where the immune system “remembers” past infections and vaccinations - and where immune cells gather to mount a rapid response against an infection the body has seen before. The open-access article is titled “Memory B Cells Are Reactivated in Subcapsular Proliferative Foci of Lymph Nodes.” The structure was only discovered when the researchers “made movies” of the immune system in action, using sophisticated high-resolution 3D microscopy in living animals. Jam-packed with immune cells of many kinds, the structure is strategically positioned to detect infection early, making it a one-stop shop for fighting a “remembered” infection - fast. We have known for millennia that people exposed to an infection are often protected from getting the same infection again - ever since the Plague of Athens in 430 BC, where plague survivors were noted to have developed immunity against reinfection. Yet, major questions remain about how the body can fight back fast when it encounters an infection that it has been previously exposed to (through a vaccine or through an earlier infection). The researchers reveal the existence of thin, flattened structures extending over the surface of lymph nodes in mice. These dynamic structures are not always present: instead, they appear only when needed to fight an infection against which the animal has previously been exposed.
Login Or Register To Read Full Story
Login Register