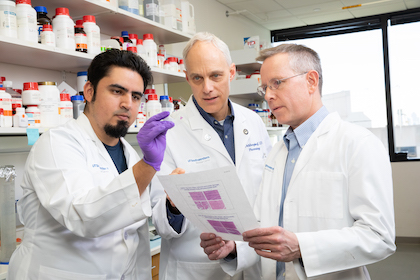 In work that could have clinical implications, University of Texas (UT) Southwestern (UTSW) researchers have found that humans and mice with pancreatitis are deficient in a stress hormone called fibroblast growth factor 21 (FGF21). Normally, FGF21 is more abundant in the pancreas than in any other organ in the body. The scientists also showed that replacement therapy reverses the condition in mouse models in about 24 hours and may even prevent it. The study also reports success with a second treatment strategy. A potential drug called a PERK inhibitor targets a different step in the integrated stress response, the cellular pathway affecting the amount of FGF21 available in the pancreas. “Given that several FGF21 drug candidates are, or soon will be, in clinical trials for conditions related to metabolic disease, it may be possible to test fibroblast growth factor 21 for treating human pancreatitis in the near future,” says David Mangelsdorf, PhD. In addition to being Chair of Pharmacology at UTSW, Dr. Mangelsdorf is an investigator in the Howard Hughes Medical Institute (HHMI). He adds that he knows of no current investigations of PERK inhibitors for clinical use. The new study was published online on January 8, 2020 in Science Translational Medicine and the open-access article is titled “Pancreatitis Is an FGF21-Deficient State That Is Corrected by Replacement Therapy.” Pancreatitis, a debilitating and sometimes deadly inflammation of the pancreas, can be acute or chronic. It accounts for about 275,000 U.S. hospitalizations each year, with its incidence on the rise for reasons that are unclear.
Login Or Register To Read Full Story
Login Register