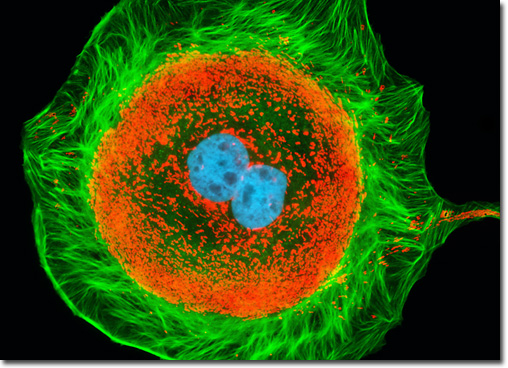 As a fundamental unit of life, the cell is central to all of biology. Better understanding of how complex cells evolved and work promises new revelations in areas as diverse as cancer research and developing new crop plants. But deep thinking on how the eukaryotic cell came to be is astonishingly scant. Now, however, a bold new idea of how the eukaryotic cell and, by extension, all complex life came to be is giving scientists an opportunity to re-examine some of biology's key dogma. All complex life -- including plants, animals, and fungi -- is made up of eukaryotic cells, cells with a nucleus and other complex internal machinery used to perform the functions an organism needs to stay alive and healthy. Humans, for example, are composed of 220 different kinds of eukaryotic cells -- which, working in groups, control everything from thinking and locomotion to reproduction and immune defense. Thus, the origin of the eukaryotic cell is considered one of the most critical evolutionary events in the history of life on Earth. Had it not occurred sometime between 1.6 and 2 billion years ago, our planet would be a far different place, populated entirely by prokaryotes, single-celled organisms such as bacteria and archaea. For the most part, scientists agree that eukaryotic cells arose from a symbiotic relationship between bacteria and archaea. Archaea -- which are similar to bacteria but have many molecular differences -- and bacteria represent two of life's three great domains. The third is represented by eukaryotes, organisms composed of the more complex eukaryotic cells. Eukaryotic cells are characterized by an elaborate inner architecture.
Login Or Register To Read Full Story
Login Register