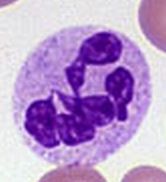 Neutrophils (image), a type of white blood cell, are the immune system's all-terrain vehicles. The cells are recruited to fight infections or injury in any tissue or organ in the body despite differences in the cellular and biochemical composition. Researchers from Brown University's School of Engineering and the Department of Surgery in Brown’s Warren Alpert Medical School collaborated to devise a new technique for understanding how neutrophils move in these confined spaces. The technique involves two hydrogel sacks sandwiched together with a miniscule space in between. Neutrophils can be placed in that space, mimicking the confinement they experience within tissue. Time-lapse cameras can then measure how fast the cells move, and traction force microscopes can determine the forces the cells exert on the surrounding gel. In a paper published online on December 18, 2014 in the Journal of Biological Chemistry, the researchers used the device to reveal new details about the motion of neutrophils. Bodily tissues are highly confined, densely packed, three-dimensional spaces that can vary widely in physical shape and elasticity. The researchers showed that neutrophils are sensitive to the physical aspects of their environment: They behave differently on flat surfaces than in confined three-dimensional space. Ultimately, the team hopes the system can be useful in screening drugs aimed at optimizing neutrophils to fight infection in specific tissue types. Traditionally, research on neutrophil motion in the lab is often done on two-dimensional, inflexible surfaces composed of plastic or glass. Those studies showed that neutrophils move using arm-like appendages called integrins. The cell extends the integrins, which grab onto to flat surfaces like tiny grappling hooks. By reeling those integrins back in, the cell is able to crawl along.
Login Or Register To Read Full Story
Login Register