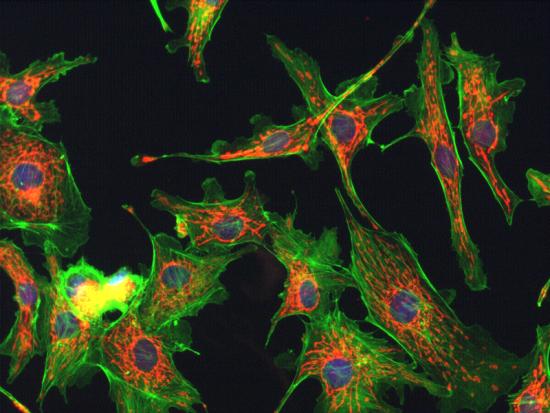 The ability of fluorescence microscopy to study labeled structures like cells has now been empowered to deliver greater spatial and temporal resolutions that were not possible before, thanks to a new method developed by Beckman Institute faculty member Dr. Gabriel Popescu and Dr. Ru Wang from his research group. Using this method, the researchers were able to study the critical process of cell transport dynamics at multiple spatial and temporal scales and reveal, for the first time, properties of diffusive and directed motion transport in living cells. Dr. Popescu leads the Quantitative Light Imaging Laboratory at Beckman, while Dr. Wang of the lab is first author on the paper reporting the method online on November 2, 2012 in Physical Review Letters. The new approach, called dispersion-relation fluorescence spectroscopy (DFS), labels molecules of interest with a fluorophore whose motion, the researchers write, “gives rise to spontaneous fluorescence intensity fluctuations that are analyzed to quantify the governing mass transport dynamics. These data are characterized by the effective dispersion relation.” That ability to study the directed and diffusive transport characteristics of cellular dispersion through a wide range of temporal and spatial scales is more comprehensive than using just fluorescence microscopy. It provides more information than existing methods, such as fluorescence correlation spectroscopy (FCS), which is widely used for studying molecular transport and diffusion coefficients at a fixed spatial scale.
Login Or Register To Read Full Story
Login Register