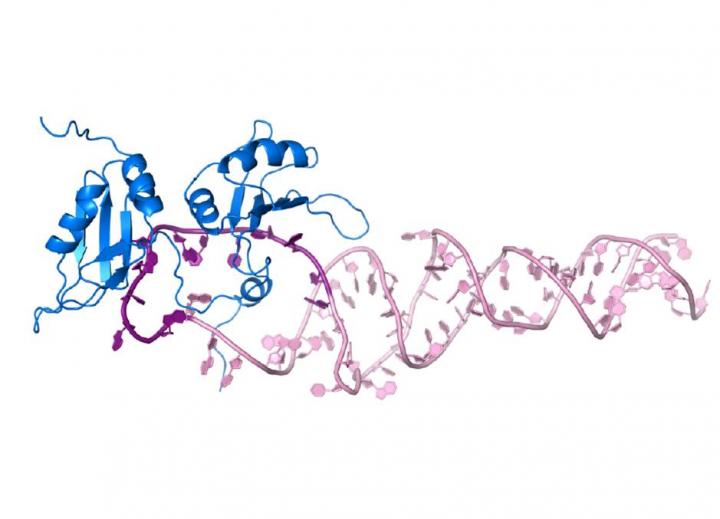 An international research team led by researchers at Helmholtz Zentrum München, Technical University of Munich, and the University of Edinburgh has used an integrated structural biological approach to elucidate the maturation of a cancer-causing microRNA in gene regulation. In the future, the authors hope to develop new therapies based on the findings published online on June 26, 2018 in Nature Communications. The open-access article is titled “Structural Basis for Terminal Loop Recognition and Stimulation of pri-miRNA-18a Processing by hnRNP A1.” MicroRNAs (miRNAs) are a class of molecules consisting of short RNA sequences that inhibit the formation of certain proteins by destroying the corresponding RNA blueprint. Cancer-causing miRNAs, so-called oncomiRs, also function according to this principle and inhibit the production of proteins that protect the cell against uncontrolled growth. "Thus, an increased presence of these molecules in cells leads to the development of cancer in the long term," said Professor Michael Sattler, Director of the Institute of Structural Biology at Helmholtz Zentrum München and Professor of Biomolecular NMR Spectroscopy at the Technical University of Munich. "However, some molecular mechanisms of miRNA maturation in the cell remain elusive." Usually, before a miRNA can act in the cell, it undergoes several maturation steps and develops from a so-called primary pri-miRNA via a precursor stage (pre-miRNA) to a mature miRNA. In the current study, Professor Sattler, together with researchers led by Professor Javier Caceres and Dr. Gracjan Michlewski from the University of Edinburgh and his former doctoral student Hamed Kooshapur (now at the National Institutes of Health, USA), investigated the maturation of a specific pri-miRNA.
Login Or Register To Read Full Story
Login Register