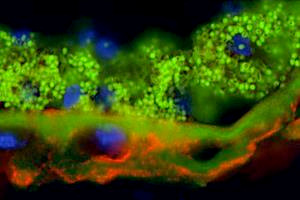 Scientists at The University of Manchester have identified an important new factor behind one of the major causes of blindness, which they hope could lead to new treatments. Age-related macular degeneration (AMD) is the major cause of blindness in the western world, affecting approximately 50 million people. It has been shown that sufferers are genetically predisposed to develop the condition. One of the most important risk-associated genes is called complement factor H (CFH). This encodes a protein called factor H (FH) that is responsible for protecting our eyes from attack by part of our immune system, called the complement system. FH achieves this protection by sticking to tissues, and when it is present in sufficient quantities it prevents the complement system from causing any damage. Scientists from Manchester’s Faculty of Medical and Human Sciences have now discovered that the protein factor H is not the main regulator of immunity in the back of the eye, instead it is a different protein that is made from the same CFH gene. This is called factor H-like protein 1 (FHL-1). The research was published online on October 15, 2014 in the Journal of Immunology. Dr. Simon Clark, a Medical Research Council Career Development Fellow, led the research: “FHL-1 is a smaller version of FH, in fact it is about a third of the size. However, it has all the necessary components to regulate the immune system and is still subject to the genetic alterations that affect AMD risk.
Login Or Register To Read Full Story
Login Register