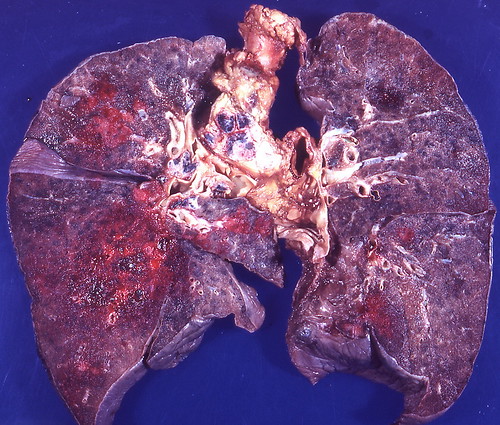 Scientists at the University of Pittsburgh (Pitt) School of Medicine and Veterans Affairs Pittsburgh Health System have discovered a new biological pathway of innate immunity that ramps up inflammation and then identified agents that can block the pathway, leading to increased survival and improved lung function in animal models of pneumonia. They reported their findings online on March 31, 2013 in Nature Immunology. Pneumonia and other infections sometimes provoke an inflammatory response from the body that is more detrimental than the disease-causing bacteria, said senior author Rama Mallampalli, M.D, professor and vice chair for research, Department of Medicine, and director of the Acute Lung Injury Center of Excellence at Pitt. "In our ongoing studies of pneumonia, we found infecting bacteria activate a previously unknown protein called Fbxo3 to form a complex that degrades another protein called Fbxl2, which is needed to suppress the inflammatory response," said Dr. Mallampalli, who is also chief of the pulmonary division of the VA Pittsburgh Healthcare System. "The result is an exaggerated inflammatory response that can lead to further damage of the lung tissue, multi-organ failure, and shock." The research team, led by Bill B. Chen, Ph.D., associate professor, Division of Pulmonary, Allergy, and Critical Care Medicine, conducted experiments in which mice that lacked the ability to make Fbxo3 were infected with a strain of Pseudomonas bacteria, and found that the mice had better lung mechanics and longer survival times than mice that still made the protein. Research team members Bryan J.
Login Or Register To Read Full Story
Login Register