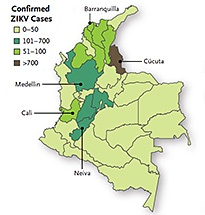 In a collaborative effort with scientists at six Colombian hospitals, Johns Hopkins Medicine researchers report what they believe to be the strongest biological evidence to date linking Zika virus infection and Guillain-Barré syndrome. Epidemiology data have long suggested a close relationship between rising Zika virus infection rates and instances of Guillain-Barré. The new study's results, published online on October 5, 2016 in The New England Journal of Medicine, support the correlation with immunologic and viral evidence of Zika infection in a substantial number of people with Guillain-Barré, the investigators say. The open-access NEJM article is titled “Guillain–Barré Syndrome Associated with Zika Virus Infection in Colombia and is accompanied by a NEJM editorial titled “Zika Getting on Your Nerves? The Association with Guillain- Barré Syndrome.” Guillain-Barré is a very rare, but potentially paralyzing, disorder of the nervous system that appears days to weeks after infection with viruses or bacteria. A so-called post-infectious immune condition, it occurs when a person's own immune system attacks the myelin sheaths that protect the body's nerve cells, often resulting in muscle weakness, pain, sensory deficiencies and, in very acute cases, paralysis. Guillain-Barré, which affects an estimated one or two out of 100,000 people after infections, is diagnosed with electrodiagnostic neurological tests that measure the conductive speed and activity of nerve signals. Scientists do not know why it strikes some people and not others. "At the beginning of the Zika outbreak in South America, my colleagues in Colombia contacted me with concern about the increasing number of patients with neurological complications in their hospitals," says Carlos A.
Login Or Register To Read Full Story
Login Register