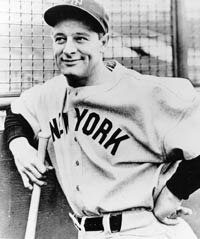 Amyotrophic lateral sclerosis, known as ALS or more popularly, Lou Gehrig's disease, is a notorious neurodegenerative condition characterized by the progressive deterioration of brain and spinal cord neurons, resulting in the gradual but catastrophic loss of muscle control and ultimately, death. In a new paper, published in the Feb. 27 advance online edition of the journal Nature Neuroscience, a team of scientists at the University of California, San Diego School of Medicine and colleagues describe the profound and pervasive role of a key RNA-binding protein called TDP-43 in ALS pathology. It has previously been shown that, when mutated, TDP-43 can cause ALS. The new work on TDP-43 was led by Dr. Don W. Cleveland, professor and chair of the UCSD Department of Cellular and Molecular Medicine and head of the Laboratory of Cell Biology at the Ludwig Institute for Cancer Research and Dr. Gene Yeo, assistant professor in the Department of Cellular and Molecular Medicine. In normal cells, TDP-43 is found in the nucleus where it helps maintain proper levels of RNA. In the majority of ALS patients, however, TDP-43 accumulates in the cell's cytoplasm and thus is excluded from the nucleus, which prevents it from performing its normal duties. Using a mouse model, the researchers made three new important findings: First, employing a comprehensive genome-wide RNA-binding mapping strategy, they discovered that more than one-third of the genes in the mouse brain are direct targets of TDP-43. In other words, the roles and functions of these genes are impacted by the presence – or absence – of normal TDP-43. Second, the genes most affected had numerous TDP-43 binding sites on very long introns. Introns are the non-coding portions of a gene that are not used to make proteins.
Login Or Register To Read Full Story
Login Register