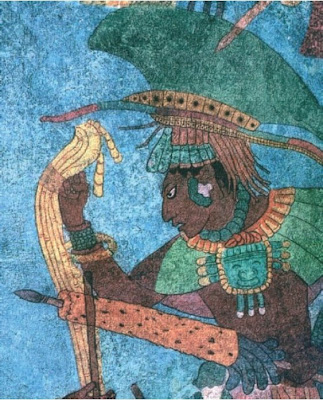 The recipe and process for preparing Maya Blue, a highly resistant pigment used for centuries in Mesoamerica, were lost. We know that the ingredients are a plant dye, indigo, and a type of clay known as palygorskite, but scientists do not know how they were “cooked” and combined together. Now, a team of chemists from the University of Valencia and the Polythecnic University of Valencia (Spain) have come up with a new hypothesis about how the mysterious pigment was prepared. Palace walls, sculptures, codices, and pieces of pottery produced by the ancient Maya incorporate the enigmatic Maya Blue. This pigment, which was also used by other Mesoamerican cultures, is characterised by its intense blue colour but, above all, by the fact that it is highly resistant to chemical and biological deterioration. Indeed, it was used centuries ago and when it is analyzed now it appears virtually unchangeable. There is no document that verifies how this paint was prepared and so it remains a mystery. Archaeologists and scientists have sought to uncover the mystery in recent years but it seems that researchers cannot come to an agreement. The dominant theory proposes that there is a single type of Maya Blue that was also prepared in a unique way and that a specific type of bond binds the two components: one organic component, indigo, the dye used for denim that is obtained from the Indigofera suffruticosa plant in Mesoamerica, and another inorganic component, palygorskite, a type of clay characterized by its crystal structure full of internal channels. But the work of a team from the University of Valencia (UV) and the Polytechnic University of Valencia (UPV) seems to contradict this “monoist” version.
Login Or Register To Read Full Story
Login Register