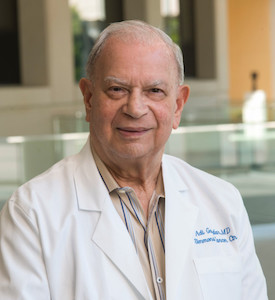 Researchers at the University of Texas (UT) Southwestern Medical Center have found a new biomarker for glioma, a common type of brain cancer, that can help doctors determine how aggressive a cancer is and that could eventually help determine the best course of treatment. Researchers from the Harold C. Simmons Comprehensive Cancer Center found that high expression of a gene called SHOX2 predicted poor survival in intermediate grade gliomas. “As an independent biomarker, SHOX2 expression is as potent as the currently best and widely used marker known as IDH mutations,” said Dr. Adi Gazdar (photo), Professor of Pathology in the Nancy B. and Jake L. Hamon Center for Therapeutic Oncology and a member of the Simmons Cancer Center. According to the National Cancer Institute (NCI), cancers of the brain and nervous system affect nearly 24,000 people annually. In 2013, there were an estimated 152,751 people living with brain and other nervous system cancer in the United States. The overall 5-year survival rate is 33.8 percent. Knowing the probable survival status of an individual patient may help physicians choose the best treatment. In combination with IDH mutations or several other biomarkers, SHOX2 expression helped to identify subgroups of patients with a good prognosis even though other biomarkers had predicted a bad prognosis. “Our findings are based on analysis of previously published studies. They will have to be confirmed in prospective studies, and their clinical contribution and method of use remain to be determined,” said Dr. Gazdar, who holds the W. Ray Wallace Distinguished Chair in Molecular Oncology Research at UT Southwestern.
Login Or Register To Read Full Story
Login Register