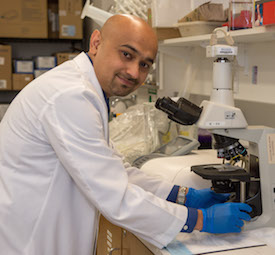 Combining targeted radiation therapy with a neutrophil stimulant enhances anti-tumor immunity, according to new research into cancer immunology at the Univerity of Texas (UT) Southwestern Medical Center. Radiation therapy is one of three core modalities to treat cancer. Researchers found that radiation therapy targeted against a tumor can act as a “cancer vaccine” by causing neutrophil-mediated tumor cell death that alerts the immune system to fight the cancer cells at other anatomical sites. The so-called “abscopal effect,” in which radiation therapy delivered to a primary site of cancer also results in shrinkage or elimination of cancer cells in non-irradiated metastatic sites has been observed for decades. “The abscopal effect is only seen sporadically, but when it does happen, the effect induces a long-lasting, anti-tumor response in patients,” said senior author Dr. Raquibul Hannan (photo), Assistant Professor of Radiation Oncology and a member of the Harold C. Simmons Comprehensive Cancer Center. “Our study in mice was designed to understand this phenomenon and identify strategies to enhance it.” Findings from the study were reported on September 20, 2016 in PNAS. The open-access article is titled “Key Role for Neutrophils in Radiation-Induced Antitumor Immune Responses: Potentiation with G-CSF. Researchers discovered what happens inside the tumor after radiation and how these events not only kill tumor cells but also lead to a whole-body anti-tumor response. Study results show that neutrophils, the most abundant white blood cell in the body, are key players in the radiation-induced anti-tumor immune response. In the absence of radiotherapy, cancer cells transform neutrophils into tumor-associated neutrophils (TANs) to help promote cancer cell growth.
Login Or Register To Read Full Story
Login Register