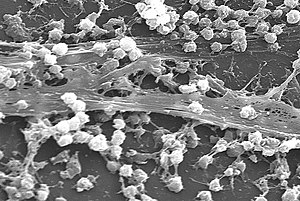 While the idea of splitting getaway condos in exotic destinations among various owners has been popular in real estate for decades, biologists at the University of California San Diego have discovered that communities of bacteria have been employing a similar strategy for millions of years. Researchers in molecular biologist Dr. Gürol Süel's laboratory in UC San Diego's Division of Biological Sciences, along with colleagues at the Universitat Pompeu Fabra in Spain, asked what competing communities of bacteria might do when food becomes scarce. The team found that bacteria faced with limited nutrients will enter an elegant time-sharing strategy in which communities alternate feeding periods to maximize efficiency in consumption. The study was published online on April 6, 2017 in Science. The article is titled “Coupling Between Distant Biofilms and Emergence of Nutrient Time-Sharing.” "What's interesting here is that you have these simple, single-celled bacteria that are tiny and seem to be lonely creatures, but in a community, they start to exhibit very dynamic and complex behaviors you would attribute to more sophisticated organisms or a social network," said Dr. Süel, Associate Director of the San Diego Center for Systems Biology and a Howard Hughes Medical Institute - Simons Faculty Scholar at UC San Diego. "It's the same time-sharing concept used in computer science, vacation homes, and a lot of social applications. "In January, Dr. Süel and his colleagues discovered that structured communities of bacteria, or "biofilms," use electrical signals to communicate with, and recruit, neighboring bacterial species. The new study investigates how two biofilm communities interact.
Login Or Register To Read Full Story
Login Register