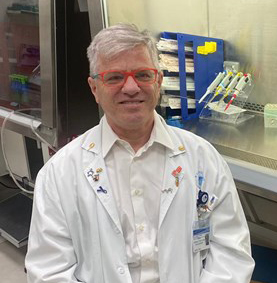 On February 6, 2021, the Jerusalem Post reported that 29 of 30 moderate-to-severe COVID-19 patients, who were administered a treatment developed by Tel Aviv’s Sourasky Medical Center (Ichilov Hospital) as part of a Phase I trial, recovered from the disease and were released within three to five days, according to a hospital statement on Friday, February 5. The 30th patient also recovered, but it took longer than five days. The Post said that the patients were given Professor Nadir Arber’s EXO-CD24 COVID-19 treatment, which is based on CD24-enriched exosomes and is meant to fight the cytokine storm that is associated with many of the world’s COVID-19 deaths. Professor Arber (photo) is Director, Health Promotion Center and Integrated Cancer Prevention Center at Tel Aviv Sourasky Medical Center. CD24 is a signal transducer molecule (https://en.wikipedia.org/wiki/CD24). “This protein is located on the surface of cells and has a well-known and important role in regulating the immune system,” explained Dr. Shiran Shapira, Head of the Laboratory of Molecular Biology at the Sourasky Medical Center and who works in Professor Arber’s lab, according to the Post. Dr. Shapira has been conducting research on the CD24 protein for over two decades, i24 News reported. The EXO-CD24 COVID-19 treatment “is based on exosomes that the body is releasing from the cell membrane and uses for intercellular communication. We enrich the exosomes with the CD24 protein, which is known to play an important role in regulating the immune system," according to Dr. Shapira, i24 News reported. The Daily Mail said that Professor Arber spent years developing EXO-CD24 for the possible treatment of ovarian cancer before trialing it on coronavirus patients.
Login Or Register To Read Full Story
Login Register