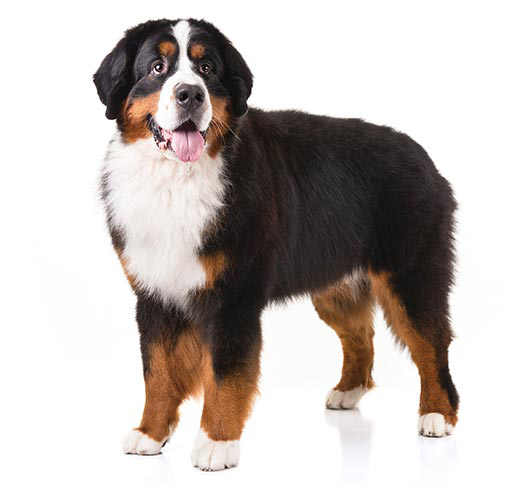 Six genetic variants add up to determine the risk of several blood cancers in pre-disposed dog breeds, according to a study by Benoît Hédan, DVM, PhD, at the University of Rennes (France) and colleagues, published online on April 1, 2021 in the open-access journal PLOS Genetics. The article is titled “Identification of Common Predisposing Loci to Hematopoietic Cancers in Four Dog Breeds.” The results confirm a known tumor-suppressor gene as a risk factor for histiocytic sarcoma (HS)--a rare and aggressive blood cancer that affects both dogs and humans--as well as identifying four new genetic loci associated with the disease. The researchers sequenced genomic DNA extracted from blood samples from Bernese mountain dogs (photo), Rottweilers, flat-coated retrievers, and golden retrievers, including 172 dogs diagnosed with HS, and 128 unaffected dogs. A genome-wide association analysis identified five chromosomal regions that cumulatively increased the risk of HS in the four breeds. Each of these regulatory regions accounted for 5-15% of cases, which may indirectly influence cancer risk. Dogs carrying five or more of these mutations had a very high risk of developing blood cancer during their lifetime. An expanded analysis including sequences from dogs diagnosed with two other blood cancers found that three of the five chromosomal regions associated with HS had multi-cancer effects, increasing the risk of lymphomas and osteosarcomas in Rottweilers, and mast cell tumors in Bernese mountain dogs and retrievers. Previous studies have used domestic dogs as a model to study the genetics of rare human cancers, but this is the largest multi-breed study of HS conducted to date. The authors hope the results can help inform an understanding of human HS, a cancer for which there are few diagnostic tools and limited clinical options.
Login Or Register To Read Full Story
Login Register