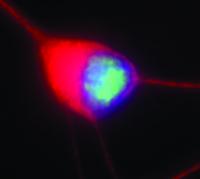 New findings reveal how a mutation that causes neurodegeneration alters the shape of DNA, making cells more vulnerable to stress and more likely to die. The particular mutation, in the C9orf72 gene, is the most common cause for amyotrophic lateral sclerosis (ALS, also known as Lou Gehrig's disease), and frontotemporal degeneration (FTD), the second most common type of dementia in people under 65. This new research by Jiou Wang, Ph.D., and his colleagues at Johns Hopkins University (JHU) was published online on March 5, 2014 in Natureand was partially funded by the National Institutes of Health's National Institute of Neurological Disorders and Stroke (NINDS). In ALS, the muscle-activating neurons in the spinal cord die, eventually causing paralysis. In FTD, neurons in particular brain areas die leading to progressive loss of cognitive abilities. The mutation may also be associated with Alzheimer's and Huntington's diseases. The normal C9orf72 gene contains a section of repeating bases; in most people, this sequence is repeated two to 25 times. In contrast, the mutation associated with ALS and FTD can result in up to tens of thousands of repeats of this section. Using sophisticated molecular techniques, Dr. Wang and his team showed that the C9orf72 mutation causes changes in the three-dimensional shape of DNA. DNA is normally shaped like a twisted ladder. However, the repeating sequences can fold into so-called G-quadruplexes, stacks of square-shaped molecules known as G-quartets. "This structure has been described as a square building with each floor representing one G-quartet, normally two to four stories high," said Dr. Wang, senior author of the Nature article. The team’s results also showed that C9orf72 mutated DNA has profound effects on how the genetic message is processed in the cell.
Login Or Register To Read Full Story
Login Register