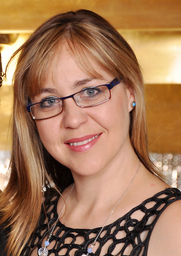 After six years of painstaking research, a UCLA-led team has validated the first standardized protocol for measuring one of the earliest signs of Alzheimer’s disease: the atrophy of the part of the brain known as the hippocampus. The finding marks the final step in an international consortium’s successful effort to develop a unified and reliable approach to assessing signs of Alzheimer’s-related neurodegeneration through structural imaging tests, a staple in the diagnosis and monitoring of the disease. The study was published in the February 2015 issue of the journal Alzheimer’s and Dementia. Using brain tissue of deceased Alzheimer’s disease patients, a group headed by Liana Apostolova (photo), M.D., Director of the Neuroimaging Laboratory at the Mary S. Easton Center for Alzheimer’s Disease Research at UCLA, confirmed that the newly agreed-upon method for measuring hippocampal atrophy in structural MRI tests correlates with the pathologic changes that are known to be hallmarks of the disease — the progressive development of amyloid plaques and neurofibrillary tangles in the brain. “This hippocampal protocol will now become the gold standard in the field, adopted by many, if not all, research groups across the globe in their study of Alzheimer’s disease,” said Dr. Apostolova, who was invited to play a key role in the consortium because of her reputation as one of the world’s leading experts in hippocampal structural anatomy and atrophy. “It will serve as a powerful tool in clinical trials for measuring the efficacy of new drugs in slowing or halting disease progression.” The brain is the least accessible and most challenging organ to study in the human body; as a result, Alzheimer’s disease can be diagnosed definitively only by examining brain tissue after death.
Login Or Register To Read Full Story
Login Register