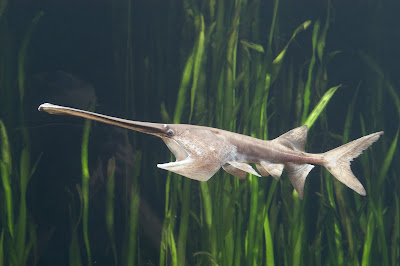 People experience the world through five senses, but sharks, paddlefishes, and certain other aquatic vertebrates have a sixth sense: they can detect weak electrical fields in the water and use this information to detect prey, communicate, and orient themselves. A study published online on October 11, 2011 in Nature Communications caps more than 25 years of work and finds that the vast majority of vertebrates – some 30,000 species of land animals (including humans) and a roughly equal number of ray-finned fishes – descended from a common ancestor that had a well-developed electroreceptive system. This ancestor was probably a predatory marine fish with good eyesight, jaws, and teeth, and a lateral line system for detecting water movements, visible as a stripe along the flank of most fishes. It lived around 500 million years ago. The vast majority of the approximately 65,000 living vertebrate species are its descendants. "This study caps questions in developmental and evolutionary biology, popularly called 'evo-devo,' that I've been interested in for 35 years," said Dr. Willy Bemis, Cornell professor of ecology and evolutionary biology and a senior author of the paper. Dr. Melinda Modrell, a neuroscientist at the University of Cambridge who did the molecular analysis, is the paper's lead author. Hundreds of millions of years ago, there was a major split in the evolutionary tree of vertebrates. One lineage led to the ray-finned fishes, or actinopterygians, and the other to lobe-finned fishes, or sarcopterygians; the latter gave rise to land vertebrates, Dr. Bemis explained. Some land vertebrates, including such salamanders as the Mexican axolotl, have electroreception and, until now, offered the best-studied model for early development of this sensory system.
Login Or Register To Read Full Story
Login Register