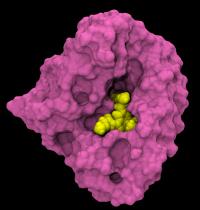 The malaria parasite is particularly pernicious because it is built to develop resistance to treatments. The lack of new therapeutic approaches also contributes to the persistence of this global scourge. A study led by Dr. Didier Picard, professor at the Faculty of Sciences of the University of Geneva (UNIGE), Switzerland, describes a new class of molecules targeting the two problems at the same time. Using ultra sophisticated computerized modelling tools, the researchers were successful in identifying a type of candidate molecules toxic for the pathogen, but not for the infected human red blood cells. The study, led in collaboration with researchers from the Geneva-Lausanne School of Pharmacy (EPGL) and the University of Basel, has been published online on March 3, 2014 in the Journal of Medicinal Chemistry. The most severe form of malaria is caused by infection with Plasmodium falciparum. The eradication of this parasite is even more difficult as it becomes resistant to treatments. The group led by Dr. Picard is closely interested in the protein heat shock protein 90 (HSP90), which plays a central role for several factors involved in the life cycle, survival, and resistance of the pathogen. Expressed in organisms as diverse as bacteria and mammalian cells, HSP90 acts as a "chaperone," by helping other proteins during both normal and stressful periods. In the Plasmodium, HSP90 protects parasitic proteins during high fevers triggered by its presence. The chaperone also participates in the maturation of the pathogen in human red blood cells. "Our goal was to determine if there was a difference between the human form and the parasitic form of HSP90 that we could exploit for therapeutic purposes," explains Tai Wang, a Ph.D. student at the Department of Cell Biology of UNIGE.
Login Or Register To Read Full Story
Login Register